Character Guide
Each character’s strengths and weaknesses are clearly distinguishable.
Even the most advanced players cannot play long-range with a close-range character.
Choose a character that suits your playstyle!
Gauge Management
DNF Duel has a variety of gauges. Strategically managing these gauges is the shortcut to victory!

During Awakened status, passive skills will be activated for all characters.
Passive skills either balance out the character's weaknesses or highlight the character's strengths.
TIP
As the round progresses, most likely character HP will decrease as well,
which means that passive skills will be added and stronger skills can be used all at once.
If you are low on HP, aim for a comeback through the consecutive use of passive skills,
and if your opponent is low on HP, fortify your defenses to limit counterattacks!
Using Tutorial Combos 1
In general, it is recommended to master combo number 1 and 2.
Typically, skills are performed in the order of

at around 5 skills.
The key to performing combos is to follow up with an attack slightly before the precedent attack finishes.

Combos will not connect if they do not hit the opponent!
Even when the commands are input correctly, they are carried out at a much slower pace if the attack does not hit your opponent.
For this reason, it is very important to land your attacks.

In general, combo difficulty increases dramatically starting from the third combo.
The reason for this is one of the following:
Previous combos only needed precise input timing, however such combos additionally require precision in jump timing.
These combos need a lot of practice- they may be difficult to perform at first, so you may want to focus on mastering the first and second combo sequences to start.

TIP
It is more beneficial not to use combos if they cannot at first be carried out to their full sequence in practice mode.
This is because failure of a combo will result in disadvantageous openings.
Using low-damage skills that have a higher chance of succession may bring much favorable results.
Using Tutorial Combos 2
If so, are advanced combos useless for beginners?
You can apply snippets of advanced combo sequences into your own combos as shown below.

TIP
Ultimately, each character’s combo sequence is carried out in the order of

and ends with either an MP Skill or Awakening Move.
When creating your own combos, keep the above sequence in mind to create much smoother combo chains.
Strategy for Breaking Guard 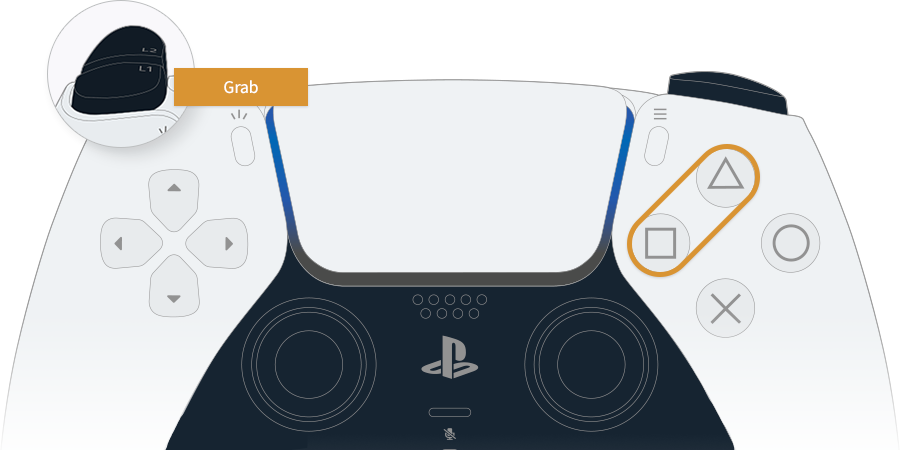 Controls can be customized and mapped in Options.

Grabs cannot be evaded by forward rolls or guards, and can only be evaded by jumping.
As such, it can effectively pressure an opponent who is evading attacks by guarding.

TIP
You can release the grab of an opponent by timing a grab at the same time.
However, the grab is only released when you are able to successfully predict the grab and perform it almost simultaneously.
In other words, it is near impossible to release a grab if you perform the action after confirming the opponent’s move visually.
The one thing to keep in mind with a grab is that it cannot be used within an attack sequence.
Do not use it in conjunction with attack skills. Generally it is best used when you are sufficiently close to your opponent to catch them off-guard.

TIP
To see what happens with an unsuccessful grab, try using a jump attack and using grab
immediately. Note that you will not be able to grab your opponent even in close proximity.
As can be seen, mixing grab skills can induce an opponent in guard to jump.
Attack while pretending to grab and vice versa, to break your opponent’s guard!
TIP
You must be precise in your predictions and attacks in order to break an opponent’s guard.
If you anticipate that your opponent will stay in guard stance, performing a grab is ideal since grabs cannot be guarded.
If you anticipate that your opponent will jump in order to avoid a grab, attacking is ideal since one cannot guard while jumping.
Since an opponent’s guard can be broken by accurately predicting their next course of action, the attacker cannot chain a grab with attack moves.
This is because if grabs connect between combos, it results in the opponent being both attacked and grabbed at the same time.
Escape when Cornered
In practice mode you can see that some very powerful combos can only be used on an opponent who is cornered.
As such, when cornered, it is very important to escape at any cost!
Here are the main ways you can do so:

TIP
How to use forward roll while pressing the back button?
When you successfully guard, you can see that it is maintained for a slight period even when you are not pressing the directional keys.
At this moment, hold the forward directional key and the input the guard button.
However, take note that it will not work if you hold the guard button and input the forward directional key!
A forward roll is more useful than jumps for evading attacks, but grabs cannot be evaded!
The following actions can be taken when guarding.
Automatic Landing
If the opponent fails to continue dealing attacks, the attacked character will automatically land.

The white flashing signals that the attacked character is automatically landing!

When the landing is in effect, the character will be invulnerable until posture is regained.
After the landing, you can crouch guard or fight back.
In most cases, it is safer to use crouch guard!

Landing is induced in the air as it is on the ground, and likewise your character will be invulnerable until posture is regained.
The biggest difference with an aerial landing is that you can attack during the timeframe of your landing.
However, attacking at this moment will end your invulnerability, and you may be at risk of being attacked!
As with ground landing, the safest way is to use crouch guard after landing to foremost properly assess the situation.
Overcome Limits with Conversion 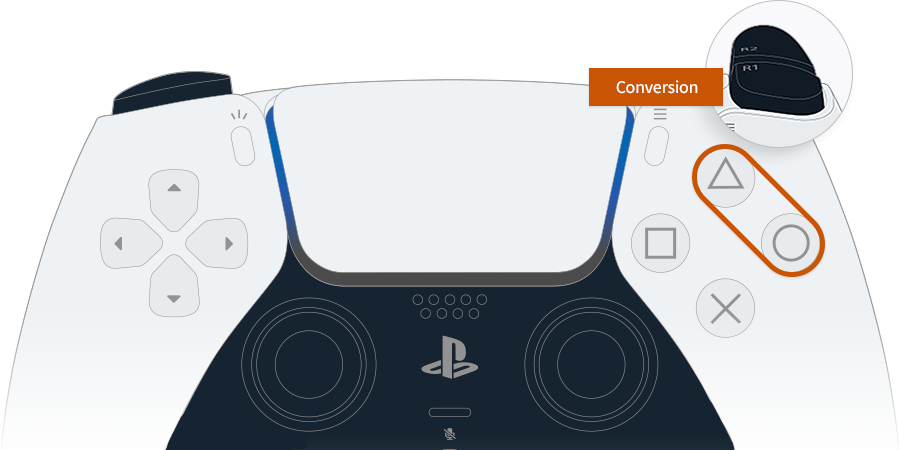 Controls can be customized and mapped in Options.

There are two conditions when using Conversion.
Using conversion when the above conditions are met will result in the following:
Conversion uses up all the HP that can be recovered, however it can be used to start a combo again mid-way through or make up for attacks that miss.
In other words, once you are familiar with using combos, Conversion can greatly aid in overcoming your limitations once more.
TIP
Wouldn’t it be easy to escape by using Conversion even during guard?
Correct. Conversion used during guard is a guard cancel, and thus the commands are very similar.
During guard, use guard cancel instead of conversion to escape!